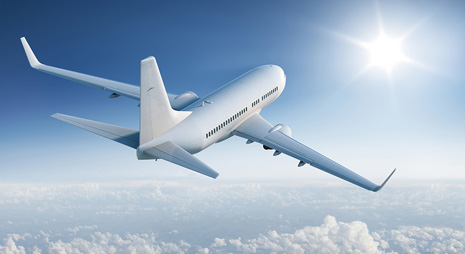 Alaska Airlines made history recently, flying the first commercial flight using the world’s first renewable, alternative jet fuel made from the remains of logging and thinning in sustainably managed forests.

Aviation biofuel is made from forest residuals, the limbs and branches that are left after the harvesting of managed forests. The renewable, clean jet fuel was produced during five years of research and testing conducted by the Washington State University-led Northwest Advanced Renewables Alliance.

Producing a new generation of modern, clean jet fuels made from renewable woody material from sustainably managed forests will be a critical element of the broader effort to combat climate change. One dry ton of woody biomass is treated to accelerate fermentation to make approximately 45.6 gallons of biofuel for airplanes.

“The beauty of this fuel is that we’re using the forest residue not used in other wood products,” says Michael Wolcott, Director, Institute for Sustainable Design, Washington State University, co-project manager for the NARA project. “We’re taking a waste byproduct and turning it into something highly useful and valuable.”

The Environmental Protection Agency recently declared that jet exhaust endangers public health by contributing to global warming. Large commercial jets account for 11 percent of all emissions from the global transportation sector, and aircraft emissions are expected to grow by 50 percent by 2050 as demand for air travel increases.

“A wide variety of stakeholders took part in this collaborative effort – from private forest owners, to local Native American tribes, to the airlines,” Wolcott says. NARA brings together 32 member organizations from industry, academia and government laboratories. “We all wanted the same thing: to lower the carbon footprint of the aviation industry to comply with the goals of the United Nations and the Environmental Protection Agency.”

Stakeholders are looking toward the future, with an eye to sustainability. “We are working on developing hybrid poplar plantations as a sustainable source of energy feedstock for the future, low-carbon bio-economy,” says Brian Stanton, Chief Science Officer at Greenwood Resources.

The Alaska Airlines commercial jetliner flew cross-country from Seattle to Washington D.C. fueled with a 20 percent blend of sustainable aviation biofuel, which is chemically indistinguishable from regular jet fuel.

While the 1,080 gallons of biofuel used on only the recent historic flight has a minimal impact to Alaska Airlines’ overall greenhouse gas emissions, if the airline were able to replace 20 percent of its entire fuel supply at Sea-Tac Airport, it would reduce greenhouse gas emissions by about 142,000 metric tons of CO2. This is equivalent to taking approximately 30,000 passenger vehicles off the road for one year.

Clean fuel is good for the local economy

This clean jet fuel is good for Washington’s economy as well as the environment. According to NARA, one biofuel plant located in the forested region between the Cascade Mountains and Pacific Ocean would create more than 1,900 new jobs, including biomass harvest, transportation and conversion into fuel. The total economic benefit is estimated at $650 million.