Expert instructors will explain the most important industry-accepted best practices that will help you:

What You Can Learn

What will you be able to go back and do as a result of this course?

Sixteen (16) Professional Development Hours or 1.6 CEUs are awarded for completion of the TAPPI Tissue 201 Course.

The Education Project Center of TAPPI has been reviewed and approved as an Authorized Provider by the International Association for Continuing Education and Training (IACET), 7918 Jones Branch Drive, Suite 300, McLean, VA 22102.

TAPPI will award CEU credits to participants who attend at least 80 percent of the educational sessions and complete a final program evaluation.

Your 2022 Panel of Tissue Experts for this Course: Jeff Peters – BTG Americas
Course Co-Chair
Jeff graduated from University of Wisconsin-Madison with a degree in Chemical Engineering.  He started his career with Hercules Incorporated.  Over his 23 year career he spent time in field sales, Global Tissue Applications, Tissue Business Management and Global Tissue Marketing.  Jeff left the paper industry for a few years to test his entrepreneurial spirit.  Four years ago, he joined BTG Americas as the organization's Tissue Applications Manager. Jim has spent the last 30 years working in various roles within Albany International.  His current role is in press fabric product management with a focus on improving safety, drying and press fabric life through design.  Jim received a BS in Chemical Engineering from Rensselaer Polytechnic Institute and a ME in Engineering Management from the University of Colorado at Boulder. Kimberly Downing
Kimberly has been working for Valmet for nine years since graduating from the University of Maine with a BS in Mechanical Engineering and a Minor in Mathematics, as part of the pulp and paper scholarship program. Her area of focus with Valmet is thru air drying technology for tissue machines, and Yankee hot air systems. In 2017, Kimberly spent six months in Valmet's Karlstad, Sweden office working with the R&D department on a pilot tissue machine, supporting customer and vendor trials. She also assists the reference management department in supporting TAD and NTT customers with remote and on-site process support. Matt Gregersen
As product manager for tissue with Albany International, Matt is responsible for tissue forming fabric applications, managing the tissue forming product portfolio and product development for the Americas.  Prior to Albany, Matt worked for machine builders Beloit and Valmet. He was a mechanical engineer in the forming engineering group with Beloit and a project leader for pilot paper machine trials with an emphasis on the wet end and tissue with both Beloit and Valmet. Matt graduated from Bradley University with a degree in Mechanical Engineering.

Rob graduated from Purdue University with a BS in Chemical Engineering. In 2001, he started his career in the tissue industry with Kimberly-Clark, where he worked on various process and product development initiatives as well as a couple major machine rebuilds. Since 2008, Rob has been with Nalco Water, serving the company's growing number of tissue customers. He currently resides in the greater Atlanta area and is the manager of the NA Tissue Team.

John Neun
John is an engineering consultant who spent a substantial part of his career with Albany International and Kadant. He received his Bachelor’s and Master’s degrees in Mechanical Engineering from Rensselaer Polytechnic Institute, and is a licensed Professional Engineer in New York State. He has surveyed and analyzed hundreds of paper and tissue machines to find means of improving their efficiency. In addition to overall engineering analysis, John has demonstrated particular expertise in vacuum systems, water systems, fabric cleaning systems, forming systems, and presses. He has worked in the paper industry since 1979, first as a Research Engineer with Albany Felt Company, studying and developing wet felt performance and felt dewatering devices. He spent several years as a Service Engineer for Albany Felt, performing vibration analyses on most of the high-speed machines in the United States and many more throughout the world. John also had a long tenure at Kadant - AES, where he was Cleaning and Conditioning Product Manager and Design and Development Manager. Before AES, John spent five years working for Mechanical Technology Incorporated, an engineering consulting firm, where he gained a wide range of vibration analysis experience in rotating machinery, structures, and acoustics, instructed in a course on FFT spectrum analysis, and led a number of multi-million dollar projects. Mike Soucy has over 35 years of experience in the pulp and paper industry specializing in steam and condensate systems. He is currently president at Kadant Johnson Systems based out of Knoxville, TN.   He has held prior positions as president of Kadant Canada, president of Dry-Con Inc. and steam and condensate system product manager at Valmet Enerdry. Mike is a mechanical engineer graduate from Lakehead University, Thunder Bay, Ontario, Canada and a licensed Professional Engineer in the province of Ontario.

Mark Sorenson
Mark started in the paper industry as an engineering co-op student for Beloit Corporation. After graduation with a BME from Georgia Tech, he joined Beloit Corporation full time, eventually becoming the Product Line Manager for Calenders and Reels. When Beloit formed the joint venture with Kϋsters in 1996, he became the Operations Liason, and then joined Kϋsters full time in 2000 as Manager of Midwest Sales and Engineering. His latest assignment was as the Senior Sales Engineer for Andritz Paper Machinery in North America based out of Beloit, Wisconsin. In 2019, Mark retired and stays active with the TAPPI Coating and Graphic Arts Division and is a frequent contributor to TAPPI training programs. Mark’s involvement with the Tissue Short Course stretches back to 1988.  He became a TAPPI Fellow in 2018. Dave Welsford
David has held various technical and operations roles in tissue over the past 28 years. As a Strategic Project Manager for Solenis Tissue Applications, David balances research and product development interests with the implementation and problem-solving required to ensure tissue chemistries will function at their best.  David is a Chemistry graduate from the University of British Columbia in Vancouver, resides with his family in Greensboro, NC - most likely wrenching on his vintage Volvos. David Williams
David is the technical unit lead for Valmet’s roll service division. This includes technology, product management, and commercial responsibilities for all roll services. He has 15 years of service in Valmet serving in both the capital and the service business.

Prior to Valmet, David has 8 additional years in the industry split between Nalco and international Paper. Most of his career has been focused on papermaking, roll services, pressing, and headboxes. He attended both Mercer University and Auburn University obtaining degrees in chemistry and chemical engineering.

Please contact [email protected] for additional savings, if you are looking to send more than 6 people from a group.

Four-Day Program: 8 am to Noon

This course will be a four-day program, with each day only being a half-day of instruction so that you can attend this training and still attend to urgent priorities at work.

This half-day program format will include expert presentations and interactive discussion among participants.

Learning Objective
Participants will learn reliability and maintenance best practices and how to troubleshoot problems quickly.

Enter discount code TISORV22 at checkout and receive a 15% discount on your purchase(s).

Below are the resources selected for this virtual event, however the discount applies to all TAPPI Press publications.
Offer expires 12/31/22.

Links provided to purchase directly from the TAPPI.org Bookstore.  Purchases will be shipped when purchased.

NEW!  Guidelines for Safe Assessment & Operation of Yankee Dryers
A project of the Yankee Dryer Safety & Reliability Committee, this new edition provides updated guidelines relative to steel Yankee dryers, as well as new learnings and recommendations for cast iron Yankee dryers. Its contents are categorized into Engineering and Design, Maintenance and Repair, Operating Guidelines, and Personnel Safety. If you are a Yankee Responsible Person (YRP), a municipal official that makes onsite inspections, or an insurance carrier that covers Yankee dryers, this is your must have resource.

Guidelines for the Safe Operation of Steam Heated Paper Machine Dryers
This is a guide to the safe operation and maintenance of steam heated paper machine dryers.. The report includes details on dryer construction, operation, and safety guidelines. It also features a glossary, a reference list, and conversion factors for SI units.  This report was prepared by the Steam Heated Dryer Subcommittee of the TAPPI Engineering Division’s Maintenance and Mechanical Engineering Committee.

Towel and Tissue Making CD (#15 in the Making Pulp and Paper Series)
This CD includes towel and tissue papermaking terms, concepts, and processes.  After completing the CD, participants should be able to: explain how the manufacturing of towel and tissue grades of paper is different from other grades of paper, describe the different types of tissue formers, and explain the TAD process and its advantages and disadvantages.

Paper and Paperboard Converting, 2nd Edition
This revised, 12th volume in the Papermaking Science and Technology series focuses on the principal features of web converting, discusses the typical unit operations involved, and describes the converted products themselves.

This series is an excellent textbook resource for universities and colleges as well as an ideal publication to train new employees at your company.  It is also a great reference guide for your experienced workforce.  (Discount does not apply). 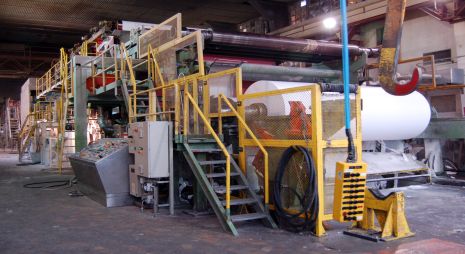 This training explores the converting processes of rolled products and how the quality and variability of tissue parent jumbo reels and soft rolls impact the runnability of these complex lines.
Learn More